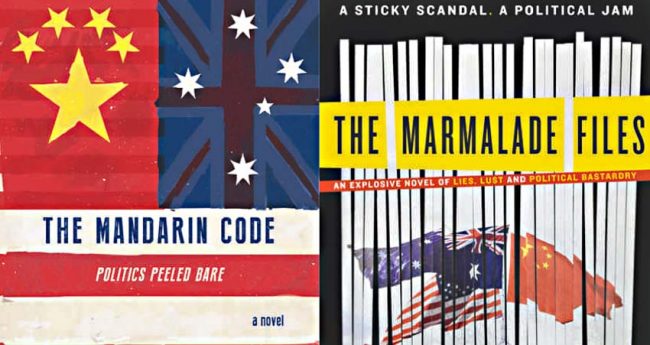 I have been thinking that I should write something about cybersecurity and the slow moving tragedy of what is happening to the Internet. But there is so much, the task seems daunting and I know I’ll just keep tinkering about the edges.

It’s trying to navigate between Scylla and Charbydis — superficiality versus getting bogged in detail.

I’ve at least begun in The Last Days of Osama bin Laden 2 and even with some insight in William Gibson’s The Art of Prophecy. I’ll keep on trying to sneak up on the issue. Remember, also that this enormous task is about the Internet, which to my reckoning (i.e. becoming functional and useful) is barely 21 years old.

On the way back home from Spain (three days late, another story) I purchased Luke Harding The Snowden Files 2014 in Singapore. Finishing it stirred up my need to write about cybersecurity. Whilst in Spain, I also read the Secret City Trilogy: The Marmalade Files, The Mandarin Code and The Shadow Game by Steve Lewis and Chris Uhlmann, 2012, 2014 and 2016, on Denise’s ipad.

END_OF_DOCUMENT_TOKEN_TO_BE_REPLACED

Trekking in the Everest Region in Spring 2013: Lukla to Gokyo

Most people who go trekking above Namche Bazaar (3440 m) want to go to Everest Base Camp (5380 m). This is despite base camp not being the most welcoming or lovely spot and that strings of trekkers are behind and in front of the whole way you, day-in-day-out. Teresa decided to take us to Gokyo Lakes and Gokyo Ri or Peak (5357 m) on a left hand zig instead. Two of the fittest of the party went with three guide porters over the Cho La Pass (5420 m) from Gokyo, to base camp via Gorak Shep and also to Kala Patthar (5643 m above base camp). While the rest of us retraced our steps part way and then zigged right. We were going Dingboche (4410 m) the start of the walk to the Island Peak (6189 m) climb — the easiest small peak in Nepal. The weather was very windy and it was quite cold so a small group of us only made it to the teahouse at Bibre (close to 5000 m), which was sheltered and didn’t continue on to Chukkhung (4730 m) beyond Dingboche.

END_OF_DOCUMENT_TOKEN_TO_BE_REPLACED

The two 500th year Bosch Exhibitions in the Netherlands and Spain

Introduction, controversy and a little spite

We’ve got to take the rivalry of the Dutch and the Spanish exhibitions with a grain of salt. Both were masterly. The Prado had three more important pictures loaned by other galleries, plus its two disputed attribution pictures. The Noordbrabants Museum in Den Bosch (colloquial name for ’s-Hertogenbosch) did an amazing tour de force for a small galley. As the Guardian Review says: From all accounts the The Noordbrabants Museum in Den Bosch has put on one of the most important exhibitions of our century.

Denise and I only visited the Prado and managed to do that that just two days before the exhibition closed. Both exhibitions celebrated the 500th year since Hieronymus Bosch’s death and I suspect that we’ll never see the like again for a generation and perhaps forever. You will know of my interest as an artist in Bosch from the article Hieronymus Bosch painter, 1450-1516.