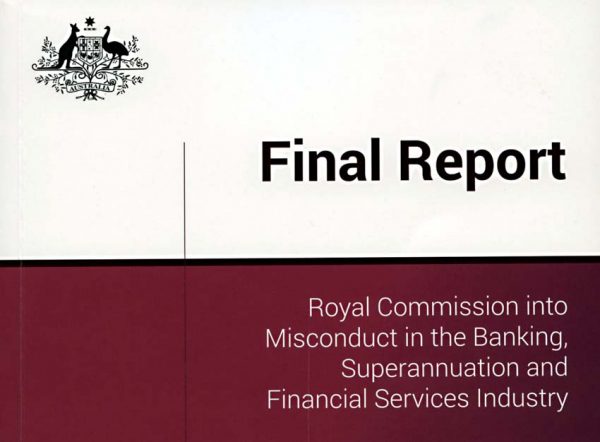 Understanding the Royal Commission into Misconduct in the Banking, Superannuation and Financial Services Industry, February 2019.

Although this may not appear to be directly relevant to overseas readers. I suspect it is worthwhile skimming through. You may find it relevant enough to read carefully, as it is a detailed case study of corporate misconduct. Banks in the USA during the global financial crisis behaved equally badly and weren’t punished for it. Earlier Enron destroyed itself through financial misconduct. Banks in the UK and Europe have also engaged in bad behaviour in a not dissimilar manner.

What is most galling for bank shareholders is that in Australia, while misconduct in the financial sector enriched individuals in entities, I suspect that these activities were not that profitable for the corporate bottom line. I have no evidence to prove this but it is a suspicion. However, it would require a forensic accountant and extensive research to demonstrate,

Even if you are from overseas, I would be amused and grateful, if you signed the petition.

When I was in New Zealand recently, which also has Australia’s banks, no one seemed interested nor had they watched the Royal Commission proceedings on TV that had us riveted in Australia. Now back in Australia I fear we are also in danger of losing interest now the circus is over.

By contrast, I think the findings of this Royal Commission are a once in a generation opportunity to understand the nature of major corporate malfeasance and how it should be dealt with almost anywhere.

In Australia, it is a once only opportunity to correct unfettered bad behaviour in the financial sector, with potential to extend this to the whole of corporate Australia and even to the government bureaucracy.

Although Australians were disgusted and appalled by the extent of the bad behaviour uncovered, I don’t think they realise that it is up to them to force the next step. They need to understand the remedy and why its implementation is crucial. The Royal Commission’s recommendations and its implementation strategy are vulnerable. Without strenuous public support and help from concerned organisations, the usual suspects lobby groups and vested interests will get their way as usual and water things down until they are ineffective.

The media and politicians have their own agendas regarding the Royal Commission. These are not necessarily sinister or manipulative, despite the implications of the impending Federal Election. However, agendas are more likely to impede than to facilitate reform.

Why should it matter? Individuals in all democratic societies today feel powerless when confronted by corporate and bureaucratic systems. We are bamboozled, mistreated and occasionally defrauded. We put up with it because we can’t imagine anything better. Anyone who has dealt with Telstra, the NBN, received a robo-debt demand from Social Security, or dealt with any automated corporate telephone menu knows exactly what I mean.