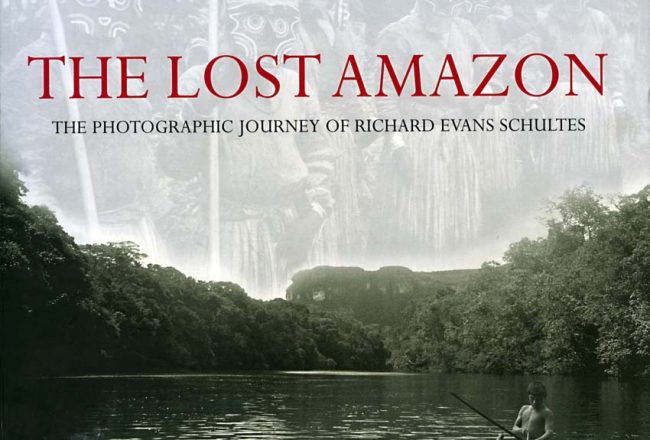 I met a young Swiss man about thirty in Pakistan in 1995. I’ll call him Marc. We shared a jeep with he and his girlfriend up the Kaghan Valley through the snow. The first time I saw Marc, though he was lean and wiry, I mistakenly thought that he was not prepared for the rigours of Pakistan. I was wrong.

He’d walked alone the length of Africa a year or so before. Earlier he’d travelled with a friend in the Pacific. The friend adopted his approach of not wearing shoes through the bush and ended up in hospital with blood poisoning.

I imagine that Richard Evans Schultes was of that type. He was a botanist, explorer and admirer of indigenous tribes for their plant knowledge in the Amazon, at a time when that was still possible.

Although George Lucas modelled the character of Indiana Jones in Raiders of the Lost Ark on several famous archaeologists, he could equally have been modelled on Richard Evans Schultes. Like Indiana Jones, at Harvard Schultes dressed as a conservative professor and thought of himself as conservative:

[He was] outfitted in grey flannel slacks, red suspenders, starched white shirt and a white laboratory coat. I was to learn that this was his uniform in Cambridge, as much as his pith helmet, khaki pants, and khaki shirt were his uniform in the Amazon.

He remained continuously in his beloved Amazon Valley [from 1941] until 1953, when a Harvard administrator discovered that he had only taken out a one-year leave of absence, and it was time to return. (Michael J. Balick)

In September 1942 he met a young Scottish soprano at his sister’s wedding:

For Dorothy, who already had her own radio show and was as liberal as he was conservative, it was love at first sight. Right from the start, though, she sensed that things might be moving a little slowly, especially when Dick invited his sister Clara along as a chaperone on their first date. Never could she imagine that it would take seventeen years for the courtship to lead to marriage. (Wade Davis)

Yet, after marriage, his wife and children were a central part of his life.

Dr. Schultes unintentionally contributed to the psychedelic era of the 1960s with his ethnobotanical discoveries of hallucinogenic plants; he loathed the recreational use of these sacred plants. [Yet, he partook of them during the ceremonies.] (Karen Robin)

His book The Plants of the Gods: Their Sacred, Healing, and Hallucinogenic Powers (1979), co-authored with chemist Albert Hofmann, the discoverer of LSD, is considered his greatest popular work: it has never been out of print. (Wikipedia)

Richard Evans Schultes (1915 to 2001) was the father of ethnobotany known for his studies of the uses of plants by indigenous peoples of the Americas in particular. He is also known for his work on plant products used in indigenous rituals particularly of a hallucinogenic nature in North America, Mexico and the Amazon and in involving himself with lifelong collaborations with chemists.

He had [a] charismatic influence in education at Harvard University producing several students and colleagues who went on to further academic distinction writing popular books and assuming influential positions in museums, botanical gardens and other related institutions. (Wikipedia)

One thinks of Schultes as an aristocrat but he was not. He came from a middle class conservative family from East Boston. His father ran a plumbing business during the depression and after, but the business struggled. Attending Harvard was financially tough in Schultes’ first year, but after that he obtained a full scholarship.

His mentor at Harvard was the Director of the Harvard Botanical Museum, Oakes Ames and Schultes became an assistant in that museum. His undergraduate senior thesis studied the ritual use of peyote cactus among the Kiowa Indians of Oklahoma. He completed his MA in Biology in 1938 and his PhD in Botany in 1941 both under Ames. His PhD dissertation was on the lost identity of hallucinogenic plants in Oaxaca in Mexico. He then received a fellowship from the National Research Council to study the plants used to make curare in the Amazon (a complex of different plants).

In 1953, he returned to the U.S. and his beloved Harvard University, where he directed the botanical museum and taught until retirement in 1985. He published 10 books, more than 450 scientific articles, and was active in the scientific journals Economic Botany, Journal of Ethnopharmacology, Journal of Latin American Folklore and Social Pharmacology, among others.

[H]e is [also] considered one of the founders of the international conservation movement.

More than 120 species bear his name, as does a 2.2 million-acre tract of protected rainforest in Colombia. During the course of his career, he documented the use of more than 2,000 medicinal plants used by Indians of a dozen tribes, and collected more than 24,000 plant specimens. Often consulting local shamans about the properties of the plants he collected, Dr. Schultes won their respect and trust by offering his own. But “time is running out,” he warned in a 1994 article in The Sciences. “The Indians’ botanical knowledge is disappearing even faster than the plants themselves.” In the introduction to his Where The Gods Reign (1988), he wrote, “A number of years ago, I heard a high ranking South American diplomat describe the Amazon as a ‘desert of trees that had to be cleared for the benefit of mankind.’ Yet, investigations by Colombian and foreign botanists have recognized an unbelievably rich flora, and the detailed knowledge of it possessed by its native inhabitants. Advancing acculturation and civilizations everywhere spell the doom of extinction of this knowledge faster even than the extinction of species themselves as a result of forest devastation.” (Karen Robin)