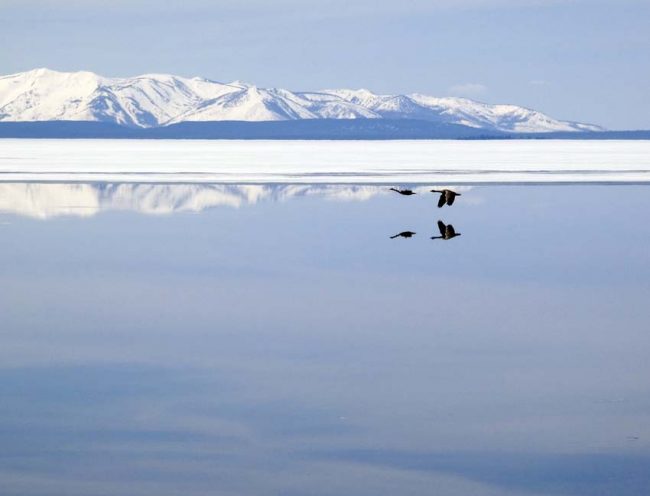 I mentioned in my recent article Wolves, Bears, Yellowstone that Yellowstone National Park was the first destination on a tour of western national parks on 9 May 2019.

Before we joined the tour Denise and I hired a car and drove from Bozeman, Montana to Cody, Wyoming and back to visit the Buffalo Bill Center of the West in Cody (also mentioned in the previous article). On this drive we skirted the northern boundary and part of the eastern boundary of Yellowstone and saw the mountains of the northern portion of the park for most of the drive. The morning we left Cody it snowed heavily and the hills and mountains were freshly covered with snow up the eastern boundary of Yellowstone. Except for the northern and north-eastern connection roads most of the other roads in Yellowstone were closed up to a week or so before we arrived and up until a day or so before we started. There was still at least one road closed while we were there.

Cody is the gateway to the Eastern Entrance of Yellowstone. On our last evening in Cody we went to hear live music at a boutique hotel. The folksy country singer was based in Texas but originally from near Cody. As an introduction to one of his songs, he talked in pejorative terms about a visitor to the park who complained about the distances and the number of animals on the road. Yellowstone is big and that is one of its main attractions. I list below some of the distances and times it takes to get around the park from its northern end.

On March 1, 1872, Yellowstone became the first national park for all to enjoy the unique hydrothermal wonders. As development spread across the West, the 2.2 million acres of habitat within the park became an important sanctuary for the largest concentration of wildlife in the lower 48 states. (National Parks Service)

They should no longer say Yellowstone was the first national park in the world, as mentioned in my previous article, there was an earlier one in Mongolia. The map and brochure visitors receive says:

We saw all but the last two animals in our three days in Yellowstone and much more besides, particularly on our guided wildlife morning described in Wolves, Bears, Yellowstone. In this article I’ll concentrate on the thermal wonders and other natural features of the park. Of the former the brochure says:

At the heart of Yellowstone’s past, present and future lies a supervolcano. Huge volcanic eruptions occurred here, the latest about 631,000 years ago. The center of what is now the park collapsed, forming a 30-by-45 mile [50-70 km] caldera or basin. The heat powering those eruptions still fuels the park’s geysers, hot springs, fumaroles, and mudspots. (National Parks Service Brochure & Map)

Yellowstone National Park at 3,437 square miles (8,903 sq km) is very large but still not large enough for the wildlife it supports. The current caldera and two older ones occupy most of the centre of Yellowstone. The supervolcano refers to the hotspot under Yellowstone, which means that the magma reservoir is closer to the surface than elsewhere. There are twenty supervolcanoes around the world but Yellowstone is the largest.

Although there is plenty of wildlife in the Yellowstone caldera, the north end of the park contains more wildlife and also other major features including: Yellowstone’s Grand Canyon area, the Lamar Valley and most but not all of the mountains. The mountain ranges on three sides of the north end of the park are the Gallatin Range (west), the Washburn Range (in the middle) and the Absaroka Range (east) which extends down the east boundary of Yellowstone. Other mountain ranges are the Red Mountains to the south of the caldera and several isolated peaks. There are 70 named peaks over 8000 feet (2400 m) but the majority are over 10,000 feet (3050 m).

I was surprised that inside the caldera the lodgepole pine (Pinus contorta) appeared almost a tree monoculture. The forests of Yellowstone consist of five conifer species. Lodgepole pine is the most dominant covering as much as 80% of the park. The other four conifers are whitebark pine (Pinus albicaulis), Douglas fir (Pseudotsuga menziesii), Engelmann spruce (Picea engelmannii), and subalpine fir (Abies lasiocarpa). There are also large areas of grassland.

At least a dozen rivers flow through Yellowstone, not surprising given the number of mountains it contains. The environment is both lovely and varied.